SuperCharge, an all-new global motorsport series featuring electric crossover vehicles and incorporating elements of off-road and drifting, has announced plans to launch in 2022. The inaugural series is targeting eight events taking place right across the globe, in cities from the U.S., Asia-Pacific, China, Europe and the Middle East, with the aim “to provide spectacular racing entertainment and ultimately promote the uptake of electric cars.”

SuperCharge has been founded jointly by managing director Rob Armstrong, who brings extensive experience from Formula 1 as well as WME IMG as its Global Head of Motorsport, responsible for the FIA World Rallycross Championship and the FIM Speedway World Championships, and Max Welti, a former professional race driver who has directed global motorsport programs for automotive manufacturers including Audi, BMW, Ford, Lamborghini, Mercedes, Porsche and Volkswagen. SuperCharge is working closely with both the British Automobile Racing Club (BARC) and Motorsport UK as it seeks to apply to become an FIA International Series.

“Motorsport is at a crossroads,” said Armstrong. “Alejandro Agag (Formula E and and Extreme E founder) and Jean Todt (FIA president) have done a great job pioneering electric motorsport. With many countries and cities already announcing plans to ban internal combustion-engine cars in the coming years, the need for road car-based electric motorsport is becoming more and more compelling. We believe it is only a matter of time before there are more electric motorsport series. Given this rapidly increasing EV momentum, we believe the timing and appeal of SuperCharge is ideal and see a clear space for it as the road car-relevant motorsport series.

“We have carefully conceived SuperCharge to take account into these societal changes and to consider the needs of car companies, fans, commercial parties and venues in order to make a truly sustainable and commercially viable new series. SuperCharge takes motorsport into a new and hugely relevant arena and we can’t wait to spark the series into life across the globe.” 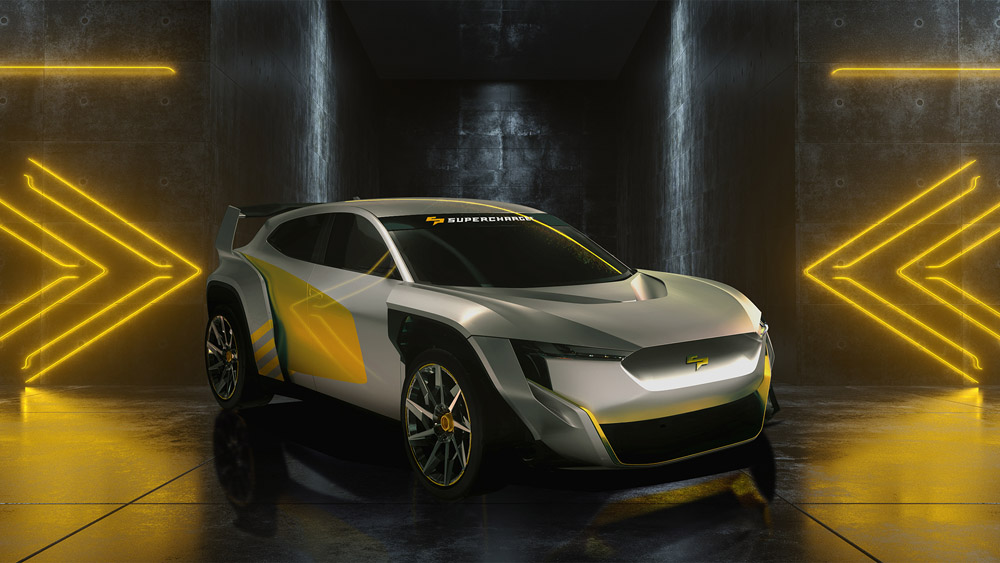 SuperCharge race vehicle will be a crossover SUV with F1-like acceleration.

As a manufacturer-focused series, SuperCharge is to be based on crossover/SUVs recognizable on the outside as electric road cars which the public can, or will be able to, buy. The spec SuperCharge race cars, to be built by German car constructor Holzer and codenamed SC01, will feature an electric motor drivetrain on the front axle and one on the rear axle, generating peak power from the battery of up to 500kW (equivalent to around 670hp). That performance will enable the car to will offer similar acceleration to a Formula 1 car, going from 0-100 km/h in 2.5 seconds.

Teams will be able to adapt the standard specification car in two ways. The first is the car’s bodywork, so the public have a clear visual link to its road-going equivalent. The second is battery technology system development, that can in turn enhance the underlying battery performance of road-going EVs. To reflect the full electric ecosystem on public roads, the SuperCharge race car will also be designed to use roadside fast charging systems and connectors.

To ensure racing is competitive and entertaining, the technical regulations will be written so as to ensure the only ways of gaining improved on-track performance come from a combination of driver skill (driver aids including launch control, traction control and brake-by-wire are explicitly outlawed), mechanical setup (including suspension and differential adjustment) and team development of battery technology systems — spanning power draw-down, battery geometry, cooling and battery management systems.

“I’ve been involved with many ground-breaking race series as both a driver and promoter and realized that motorsport as we know it has to change,” said Welti. “SuperCharge has been developed to be an intrinsic part of that change, and we are working closely with leading manufacturers and key suppliers, like German car constructor Holzer, in turning this exciting concept into reality”

SuperTrack circuits will be relatively short at around kilometer (0.62 mile) in length. An ‘amphitheatre’ concept, which can be adapted to suit a variety of urban venue settings from parks, street circuits or existing race tracks, ensures live audiences will always be right in the heart of the action. Extensive views of the fast-paced-action will be assured through a myriad of viewing platforms.

Every SuperCharge track will feature four unique characteristics. The first is the 2.5 meter/8ft ramp that could project the cars up to 10 meters/33ft on every lap. Able to accommodate two or more cars abreast, it will be an integral racing element and core circuit feature, enabling drivers to utilise different jump entry and exit tactics.

The second feature of the circuit is the low-friction zones that will allow the cars to slide, drift and touch, increasing the drama and proximity of the close-quarter racing. Every SuperTrack will also feature a water gantry, adding yet another dimension to the circuit to test driver skill by creating a dry/wet/dry surface transition.

The final feature is the SuperLoop, a once-per-race lap extension that can be deployed tactically to gain an advantage over competing drivers, and which injects an extra dose of jeopardy into every race.

Given the multitude of track conditions, SuperCharge naturally lends itself to being a playground for some of the most talented motorsport drivers. Whether the racers emanate from circuit racing, rally, cross country or off-road, the rulebook for racing’s latest series will reward driver skill, providing a gladiatorial stage to display the capabilities of high-performance electric crossover race cars.

“The SuperCharge series has amazing allure for a race driver like me,” commented rallycross veteran Tanner Foust. “In my career I’ve found that for a new motorsport to grow successfully, it has to appeal to a young demographic, as well as the major car manufacturers. The excitement of electric acceleration, high-performance and cutting-edge technology, combined with the tempo of the race day, will tick both boxes and in turn ensure a very successful series. At a time when the automotive enthusiast world is so strong, and yet the manufacturer involvement in traditional motorsport is weakening, we really need an environmentally and financially sustainable, technologically relevant racing series like SuperCharge to reinvigorate motorsport at its core. I can’t wait!”